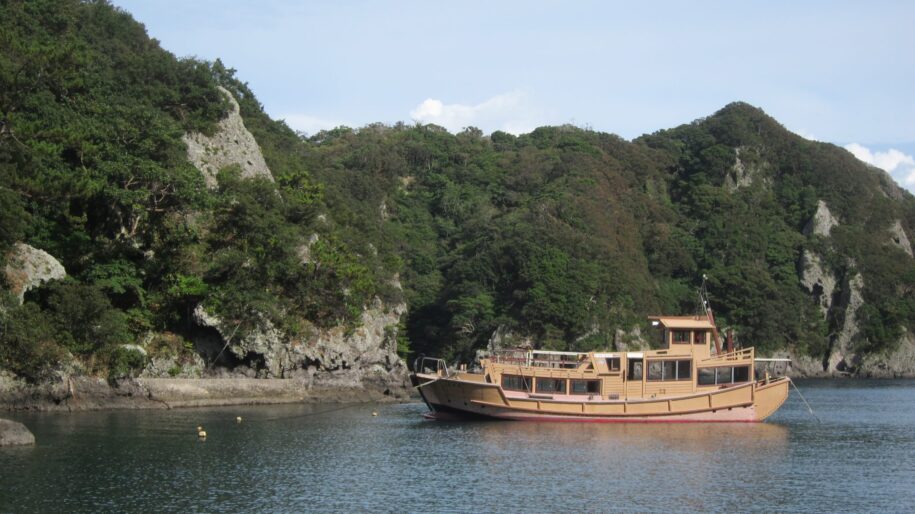 As I have mentioned in my blog about kayaking, the best way to see Izu’s beautiful and rugged coastline is from the sea. But if you are not feeling so active and don’t want to spend a day paddling then I highly recommend taking a 25 minute boat cruise around Irozaki. Irozaki is the southern most tip of the dramatic Izu Peninsula, about a 30 minute drive from Shimoda. It is also possible to take a public bus from the Kisami area to Irozaki then walk down to the peer from the bus stop. Boats depart every 30 minutes between 9:00 a.m. and 15:30 p.m. and cost ¥1200 for adults/¥600 for children. You will most likely be on the A Course tour since the B Course is only used on days when the sea is too choppy to head west. You should also know that if there is a typhoon anywhere near the seas around Japan, waves may be too big to head out at all so it may be a good idea to call ahead. Once your ship gets out of the bay, look up and you will see Irozaki (Cape Iro), easily identified with its shrine built into the cliff. You can also visit the shrine first-hand after you disembark by following the path from the peer up and along the cape. More about the shrine and look-out point here, and a link for the Izu Cruise homepage here. Happy sails!